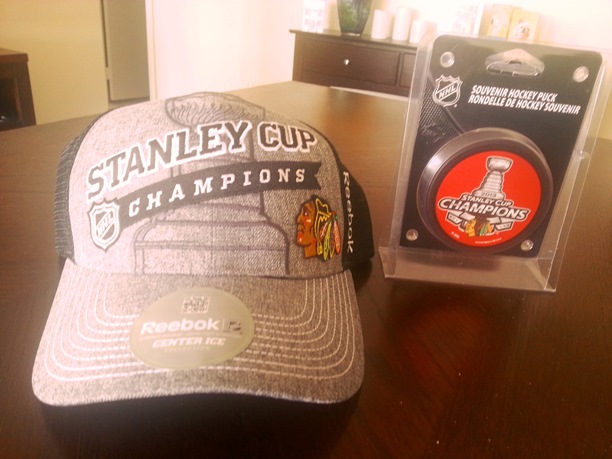 My dad hooked me up with the official locker room hat and official puck for my 2013 Stanley Cup champions, the Chicago Blackhawks.

Despite moving to New Jersey in April, my love affair with Chicago sports is as strong as ever. I am a sports fanatic, in fact. Bears, Bulls and Blackhawks are my triple threat and this season for the Hawks was probably even more spectacular than their winning season in 2010.

The 21-0-3 start, Presidents Cup champions, Crawford and Emery winning the William Jennings Trophy for allowing the fewest goals scored against, Kane winning the Conn Smythe as playoff MVP and then, in nothing less than spectacular fashion, my boys bring home the Stanley Cup to Chicago.

Having lived through the Bulls Era (or shall I say Jordan Era) in the 90s but being too young to really remember the first Three-Peat and too young to appreciate the second for what it actually meant makes the 2010 and 2013 Stanley Cup Championships the first of my adulthood for any sport.

I am so proud to call this team MY team as they are exceptional men on and off the ice. The players, coaches and organization are a class act (see: Boston full page ad) and the fans appreciate this team more than words can say. I am elated to have witnessed it and hope I get to see many more.

We Kane. We Shaw. We Crawford. Because it’s the Cup.

Stories, confessions, thoughts, secrets and dreams about myself and my life.